Jumping the Shark - An Investigation 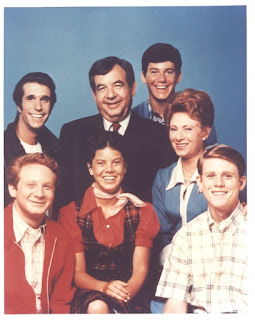 I can remember being a young lad and watching "Happy Days" on television and thinking, "I hope this show never ends..." It made for wonderful viewing for a twelve year-old boy, and its storylines hearkened back to a simpler time (in 1972, we considered the fifties and early sixties as a "simpler, much cooler" time, what with Elvis Presley and The Beatles and all). We were familiar with Ron Howard from his days as Opie on "The Andy Griffith Show" and the character of Richie Cunningham gave us an idea what Opie would have been like had we seen him continue to age. I always thought that he had traded down when he gave up Andy Griffith as a father and picked up Tom Bosley, but I blame that on his agent. We got to know Richie's goofy, hormonal friends Potsie and Ralph Malph, whose only thoughts were of making out and hanging out with buds, much like the twelve year-old boy sitting Indian-legged on the living room floor in front of the television.

Then there was Fonzie. Uber-cool, Arthur Fonzarelli was the good-hearted, motorcycle-riding hoodlum who watched over the Land of Happy Days, dispensing advise on love, life and the art of cool. Fonzie was viewed by the kids at Arnold's Drive-In hamburger shop as a rebel - although he began the series wearing a white windbreaker, as per ABC's strict control over chicanery. Soon enough, his trademark leather jacket and feathered ducktail were in full rebellious display. Fonzie could turn on the jukebox with a well-placed cuff to the side of the machine. Fonzie never sweated the ladies - he snapped his fingers and they came a-running. Yep, Fonzie was cool - Richie, Potsie and Ralph knew it and so did we. So did the Cunninghams and there was always an undercurrent of sexual tension between the Fonz and Richie's mom, Marion. Kind of twisted if you think about it, but if you were married to Tom Bosley instead of Andy Griffith and had to listen to that little freckled harpy Joannie, you'd jump at the chance to jump on the Fonz-Arelli, too.

Yep, I never wanted the show to end.

Somewhere along the line, something changed. Perhaps the change was so subtle that we viewers could not register it. Suddenly, several seasons into the show's run, I found that I cared little whether I was home to watch or not. Maybe girls and music and life and shenanigans got in the way - I was simply getting older. Or perhaps it was something more base than my gentle slide into adolescence - it was possible that the show began to suck.

Fonzie and boys began to wear hairstyles more appropriate for the mid-seventies than the early sixties. Potsie began to sing on the show. Richie left. The show was taped before an audience rather than filmed by a single camera. The studio audience began to shriek every time the now nearly-superhuman Fonzie entered the scene. Fonzie's cousin Chachi, with his full head of seventies-feathered-blown-dry hair came aboard. Everyone knows what happens when TV shows introduce new characters - see the obnoxious little cousins brought aboard "The Brady Bunch", "The Cosby Show" and "The Partridge Family" - and apparently Chachi was created to romance little Joanie Cunningham, which was disgusting enough. What made matters worse is that they were bequeathed a spin off of the show called "Joannie Loves Chachi". Ugggghhhhh...

At the beginning of season five, in some ridiculous storyline that would strain even the most hearty of the "Suspension of Disbelief-ers", it was finagled that Fonzie would water-ski jump (wearing his leather jacket) over a contained man-eating shark. What??? Decades later, this was pinpointed as the moment when the show had nothing compelling left to offer. Henceforth, the term "jumping the shark" has been used to convey the episode that a television show went into its death-march to cancellation. 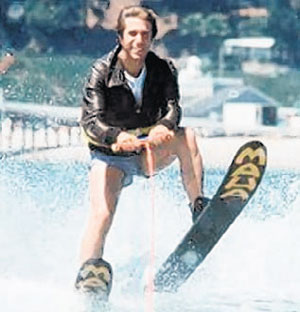 Hearken the Death-Knell
Some tell-tale signs that a show has jumped the shark: 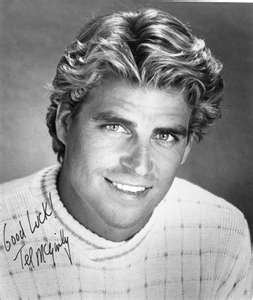 "Good luck" is right... Sayonara.
I suppose strong cases could be made for "Replacing Characters" ("M*A*S*H", "Two And A Half Men", "Cheers", etc.), "Special Guest Star Episodes" and "Introducing a young munchkin cousin who looks like John Denver" (See Cousin Oliver on "The Brady Bunch") as being strong indicators as well. All I know is that television producers, much like aging athletes, often do not know when to call it quits. I say there should be a committee (I would be delighted and honored to be a member) that keeps an eye on this. When I am King, this committee shall be formed and maintained rigorously. It will be well-paid and beyond reproach and their say will be final. No more Ted McGinley Mishaps and no more icons water skiing in leather jackets. And any scripts submitted introducing a new, precocious mop-topped cousin (with round, wire-framed glasses or not), will be incinerated, along with its writer. We need to get back to a purer, entertaining television and this would be a good start.
I submit that television itself jumped the shark the day a camera was allowed in the back seat of a police car for the pilot episode of "COPS". When the lid came off the reality TV bottle, there was simply no turning back. Cheaper to film and extremely popular with the ridiculously huge audience of  retarded lemmings who watch, reality television has beckoned the medium itself to begin its walk down the green-screen mile.  Television will survive without a doubt, but it will never be the same. Some are of the mind that this is okay. A plague on their houses, I say.
Vote Jerry Ford for King in the upcoming election. Take two pencils.﻿
﻿
﻿
﻿
﻿
Posted by Jerry Ford at 11:51 AM 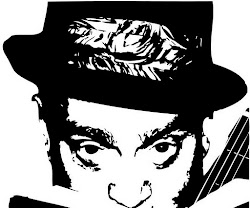 It'll do your heart good...